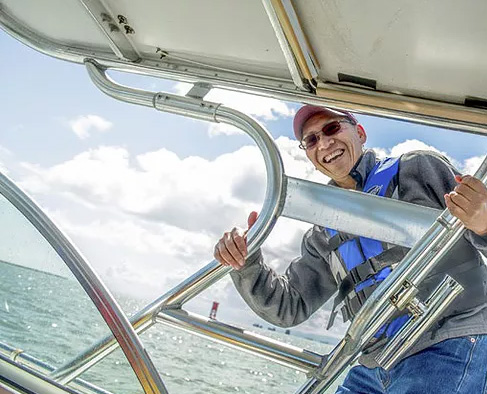 It’s cold and dark at 4:30 in the morning. That’s how Brian Yee justified his hand fumbling when he locked the front door of his San Jose home. And the dull headache just meant that he’d be uncomfortable on the boat all day.

Brian, 53, and his brother-in-law Greg left before dawn to go fishing the weekend before Thanksgiving 2017. Minutes into the drive, Brian realized he couldn’t feel the coffee mug he was lifting. He then turned to Greg to ask if he sounded strange, to which Greg replied that he sounded drunk. Greg also assessed that Brian’s grip strength was weak.

Brian immediately exited the freeway and pulled into a parking lot where Greg quickly searched Brian’s symptoms online. Without revealing the search results, Greg calmly, but firmly, suggested they go to the ER. “I wanted to go home and sleep it off, but my brother-in-law was pretty insistent that we go to the hospital ‘just to be safe,’” says Brian. As Brian walked from the driver’s side of the car to the passenger seat, his unsteady gait confirmed that something was wrong.

Brian’s signs of stroke had intensified by the time they arrived at Good Samaritan Hospital, a designated Comprehensive Stroke Center. He needed help walking and he had trouble connecting sentences. Within minutes of being admitted, Brian learned that he had a blood clot in his brain. Neurologist Dr. Noor Sachdev administered the clot-busting drug TPA, and in less than half an hour Brian had regained his speech and dexterity. “I felt 80- 85 percent back to normal,” he says. Brian was released from the hospital a few days later with no deficits.

Stroke was a shock to Brian and his family. Equally surprising was the hole in his heart, known as patent foramen ovale (PFO), which was discovered while he was hospitalized. PFO often goes undetected and can cause a stroke when a blood clot passes through the hole. Soon after his stroke, Brian had surgery to repair the PFO.

Knowing now that stroke can strike beyond obvious risk factors, Brian and his wife Sandy are passionate about educating others. “Be aware of stroke symptoms and take action immediately. That’s what saved my husband,” says Sandy. Looking back, Brian considers the disabilities he could have suffered had he not received immediate care. “I feel very lucky,” he says. “Everything fell into place.”