Stroke leads to happily ever after for young survivors 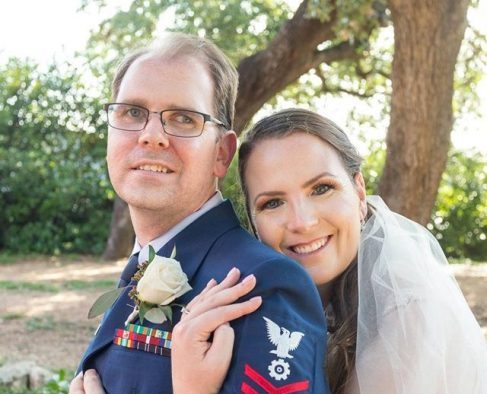 Stroke leads to happily ever after for young survivors

To stroke survivors Tara and Sean, the month of May will forever hold deeper meaning to them than National Stroke Awareness Month.  The couple gathered with family and friends this month to celebrate their wedding and the incredible journeys that brought them together.

In 2016, Tara, a native California girl and graduate of Valley Christian High School in San Jose, was working in San Antonio, Texas, in clinical mental health counseling when she decided one evening to do an Internet search for “Coasties who survived stroke.”  Although the 32-year-old insists the search was random, hindsight reveals a clear, but chaotic path that led her to Sean.

A childhood of migraines

Advanced medical technology suggests that Tara began suffering bilateral ischemic strokes as young as 3 years old.  Her symptoms presented as frequent headaches and she was diagnosed with pediatric migraines at age 5. Throughout her childhood, Tara learned to manage the discomfort that was often accompanied by brief moments of slurred speech, impaired vision, and a limp.  Doctors assured her and her parents that nothing was seriously wrong. “I was a highly functioning child otherwise,” says Tara, who excelled academically, was a star varsity athlete in water polo and swimming, and had dreams of joining the United States Coast Guard (USCG) as a rescue swimmer.  Everything changed her junior year of high school.

Tara and her parents were celebrating their annual family tradition of dinner at a favorite restaurant to mark a positive start to the new school year.  Partway through the meal, Tara suddenly lost control of her right hand and projected her fork in a way that she describes as something easily mistaken for a teenage tantrum.  She recalls being fully aware, shocked, and confused by what had just happened. “It was the strangest sensation. I knew my speech was gone even though I wasn’t speaking at the time, and as quickly as my right arm lost control, I could feel paralysis moving down the right side of my body,” Tara says.  When she started leaning to the right, her father jumped up to keep his daughter from falling. He lifted her arm above her head and it fell straight down. After a few minutes, Tara regained her speech and all feeling in her body as though the episode never occurred. Later that night, a migraine struck and remained through the next day.

It was then that Tara’s symptoms were more carefully scrutinized by medical professionals.  She underwent months of extensive testing, each result inconclusive. In May 2004, a few weeks before the end of junior year, 17-year-old Tara was diagnosed with Moyamoya, a rare disease of the carotid arteries that affects one in 2 million people.  The serious condition, which drastically narrows or closes the carotid arteries, can cause ischemic or hemorrhagic stroke. At the time of Tara’s diagnosis, her right carotid artery was 97 percent closed and her left carotid artery was 94 percent closed.

Within 30 days of diagnosis, Tara underwent two brain surgeries at Stanford under the care of Dr. Gary Steinberg, chief of neurosurgery and leading expert in Moyamoya treatment.  Dr. Steinberg was able to restore blood flow through a bypass procedure that connected a scalp artery to a brain artery on Tara’s left and right sides. She has since been migraine and symptom-free, and has used the experience to redesign her life goals.  “Moyamoya is a part of who I am,” she says. As such, she is an advocate for Moyamoya awareness and patients with the disease, and her own experience led her to become a licensed therapist with a special interest in helping patients and their families navigate the emotional side of chronic illness.

On that fateful night of Internet searches, Tara recalls feeling down after a couple of friends suggested to her that she apply for a job with the VA.  She had a strong interest in working with military veterans, but her license did not meet the agency’s requirements. At the computer, Tara’s mind raced from one search term idea to another, producing results that kept her looking for something more.  “Coasties who survived stroke” was the winning term.

Tara recalls that only Sean’s name and story appeared in the lengthy list of search results.  In June 2011, Sean was serving with the USCG in Jacksonville, Florida, when he suffered a massive hemorrhagic stroke due to a brain aneurism burst at the age of 23.  He’d had a terrible headache, to which he attributed to a night on the town, and he shrugged off a friend’s suggestion to go to the hospital when she mentioned that he was behaving abnormally.  When Sean later collapsed in the kitchen, his friend called 911 immediately and Sean was transported by ambulance to Mayo Clinic.

Emergency brain surgery was performed to stop the bleeding and Sean was subsequently placed in a medically-induced coma for nearly two months.  He was eventually assigned to roughly six months of intensive inpatient rehabilitation followed by approximately one year of outpatient therapies where he relearned to walk, talk, and live independently.  Sean’s lingering deficits include blindness in one eye and fine motor skill difficulties. Today, he works as a physical therapy assistant helping others to regain their strength and independence.

Moved by his story, and as a young stroke survivor herself and someone who once dreamed of a career in the Coast Guard, Tara was inspired to reach out to Sean.  “I can’t not say hi to this guy,” she recalls thinking. She found him on Facebook and he accepted her friend request a day later. It was January 2017. Though Tara and Sean lived 1,200 miles apart, she in Texas and he in his home state of Georgia, the two connected instantly.  They spoke daily on the phone for months and finally made the leap to meet face-to-face. Nearly two years later, the couple is looking forward to building and sharing a long life together.

“Sean is hands-down the best thing that came from stroke,” Tara says of her new husband.