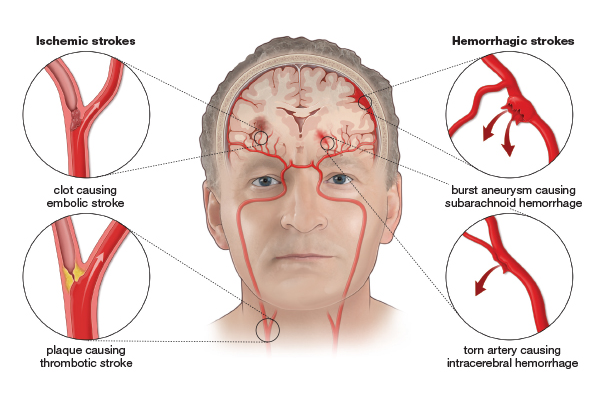 A stroke, sometimes referred to as a brain attack, occurs when the blood supply to the brain is blocked by a clot or tear in a blood vessel.

There are two types of stroke: ISCHEMIC & HEMORRHAGIC

In an ischemic stroke a blood vessel becomes blocked, usually by a blood clot, and a portion of the brain becomes deprived of oxygen. Ischemic strokes are the most common type of stroke, representing about 87% of all strokes. In one second, 32,000 brain cells die, and in 59 seconds an ischemic stroke will have killed 1.9 million brain cells.

A hemorrhagic stroke can occur when an aneurysm, a blood-filled pouch that balloons out from an artery, ruptures, flooding the surrounding tissue with blood. The fatality rate is higher and prognosis poorer for those who experience hemorrhagic strokes.

In the United States, about 795,000 people suffer a stroke each year. Someone has a stroke every 40 seconds, and every 4 minutes someone dies from stroke. There are more than 140,000 deaths each year from stroke. Statistics show that about 40% of stroke deaths occur in males and 60% in females.

Stroke is also the leading cause of serious long-term disability in the United States. There are over 7 million stroke survivors live in United States and two-thirds of them are currently disabled. Around 25% of people who recover their first stroke will have another within 5 years.

80% OF STROKES ARE PREVENTABLE!

Strokes can and do occur at ANY age. Nearly one quarter of strokes occur under the age of 65. The risk of stroke more than doubles each decade after the age of 55.

Read how you can Reduce Stroke.